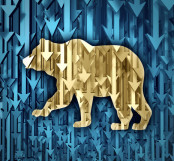 The Dow 30: A Look Into the Last Five Recessions

There have been 11 recessions since The Great Depression in 1929; there has been at least one recession every 10 years. Both depressions and recessions take a toll on the stock market, and as markets get more and more competitive and the economic environment changes, companies become more prone to bankruptcy and M&A.

Be sure to also read about the Complete History of the Original Dow Dozen.

The Dow 30 includes some of the most significant and influential companies in the world. Due to the reliability and stability of these companies, many investors seek out Dow stocks to invest in.

Below, we look at the performance of the current Dow 30 during the last five recessions.

The 1970s recession began in November 1973 when gas prices skyrocketed after oil exports to the United States were stopped by OPEC. This would become known as the 1973 Oil Crisis. High government spending and a stock market crash in 1974 also added to this recession, which at the time was the worst economic downturn since The Great Depression.

The stock market crash of 1974 was triggered by the collapse of the Bretton Woods system and the Oil Crisis of 1973. The Dow lost 45% in value during this crash, making it the seventh worst bear market in history.

United Technologies Corporation (UTX) and The Boeing Company (BA) were top performers during this recession, but the performance of technology stocks was mixed. On the other hand, stocks like 3M Co (MMM) declined significantly during the recession.

The U.S. entered into a recession in January 1980, which was primarily caused by a disinflationary monetary policy adopted by the federal reserve and cuts in domestic spending made by Ronald Reagan.

This recession is actually considered to be two separate recessions. The 1980 recession lasted throughout the first six months of the year and The Early 1980s recession went from July 1981 to November 1982.

From February to April 1980, the Dow fell 16%. As a result, the Federal Reserve cut the Fed Funds rate to 8.5%. Although this adjustment caused the Dow to rise, the Fed brought rates up to the point to combat inflation, causing the Dow to fall 22%. During the recession, many goods producing companies were hurt, while the services sector continued to thrive.

Although this recession is considered to be the worst recession since the Great Depression (excluding the 2008 recession), there was plenty of upside for some of the current Dow stocks. Top performers of the Dow included Wal-Mart (WMT), American Express (AXP) and McDonald’s (MCD), which all jumped over 100% during this time period.

Three years after the 1987 stock market crash, which caused a larger downfall on the Dow than the Great Depression, the Early 1990s Recession began in July 1990. Although the stock market started to recover, the financial industry began to crumble, causing the savings and loan crisis.

In addition to the 1987 stock market crash, Iraq’s invasion of Kuwait, which caused oil prices to rise, triggered the Early 1990s Recession in the United States. During this time, financial services companies and insurance companies were hit the hardest.

The early 2000s recession began in March 2001 and was a result of the combination of the collapse of the 1990s dot-com bubble, a fall in investments, and the 9/11 attacks. The recession was relatively mild and may have been avoided altogether if the 9/11 attacks did not happen.

The dot-com bubble began in the early-to-mid 1990s when there was a significant increase in the number of people that had internet access. As more and more internet companies were created, more investors became certain that these companies would see a tremendous amount of upside. However, not all of these companies survived, leaving investors with large losses.

The collapse of these “dot com” companies was the primary cause of the 2001 stock market crash – even more so than the terrorist attacks. This collapse began almost a year before the official recession. Technology stocks like Intel Corporation (INTC) plummeted from 2000-2001, but was one of the top performers during the official recession as its share prices recovered. This was accompanied by other strong technology contenders and current Dow components – Microsoft (MSFT) and IBM (IBM) – each of which saw an 8% improvement in share prices.

After the 9/11 attacks, stocks in the airline and aircraft industries, including Boeing (BA), plummeted, while the defense, healthcare, and communications industries saw an upside.

The 2008 recession, or Great Recession, was caused by the subprime mortgage crisis that led to the U.S. housing bubble. This bubble led to the collapse of large financial institutions and a $700 billion bank bailout by the U.S. government. In just 17 months, the Dow fell 50%. The pace of the decline accelerated in September 2008 when Lehman Brothers filed for bankruptcy.

Industries hit hardest during this recession included construction, manufacturing, and real estate. On the upside, industries such as education services and health services saw a jump during the recession. Wal-Mart (WMT) was the top Dow performer, as consumers turned to discount stores to save money. Learn more about Wal-Mart and the Recession Factor