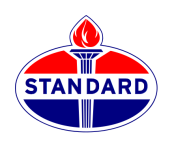 The History of the Standard Oil Company: An Infographic

In the early 1900s, Standard Oil was one of the largest names in the world. The company had its reach all across the United States and was headed by none other than famed entrepreneur John D. Rockefeller. But that all changed in 1911 when the company was forced to fracture into a number of parts due to the firm being considered a monopoly. What many may not realize is that these fractured parts would eventually make up the firms that are currently the most dominant in the crude oil/fossil fuel industry.

A Brief Look at Standard Oil

Public outcry began to grow in the early 1900s, forcing the United States to enact the Sherman Antitrust laws in order to break up this mega company. It is estimated that if the company was still together, its market cap would be in excess of $1 trillion and would easily be the largest company in the world. Instead, the United States forced the company to dissolve into 34 different firms. To learn more about companies that went up against anti-trust laws, be sure to read 5 Big Mergers And Their Battle With Antitrust Laws.

The only other company to be split in such a manner was AT&T (T ) in 1984 when the firm was forced to dissolve into the “Baby Bells.” Seven of the Standard Oil spin-offs continued to have such a strong presence that they were dubbed the “Seven Sisters” and would go on to be the foundation for today’s oil industry.

Below, we break-down how the Seven Sisters evolved over time and where the companies are today:

The Beginnings of Big Oil

Just about the only major (U.S.-based) oil player that does not have significant ties to Standard oil is ConocoPhillips (COP ). Here is a look at these major oil producers today and where they stand as stocks:

ExxonMobil (XOM ): After Exxon and Mobil merged in 1999 (one of the biggest corporate mergers ever), ExxonMobil worked its way up through the ranks of American companies. Exxon has competed with Apple (AAPL ) for the largest company by market cap, but it continues to hold the second place trophy. The company is the largest oil company in the world and as a dividend-payer, XOM may not have the highest yield, but it has increased its payout for 32 straight years.

Chevron (CVX ): Evolving from the Standard Oil of California Sister, Chevron is another that is among the largest companies in the world. The company has increased dividend consecutively for 29 years, Its annualized dividend growth over the last five years has been 9.6%.

BP PLC (BP ): Headquartered in the U.K., BP is another big player that has significant roots in the Seven Sisters. Though the company has been more associated with its 2010 oil spill, the stock has slowly worked its way to pre-spill levels and has consecutively dividend payouts for the last three years. Be sure to also check out The Biggest Dividend Stock Collapses of All Time.

Marathon Oil (MRO ): Not to be confused with its 2011 spin-off Marathon Petroleum, Marathon Oil went on to become a prominent explorer and producer across the world. It had a solid history of dividend increases until it was forced to cut its payout in 2011. The company is looking to get back to its old dividend as it has featured strong increases in the last three years.

Marathon Petroleum (MPC ): Often still confused with its former parent company, Marathon Petroleum has been its own entity since 2011 (and has increased its dividend every year since). Rather than moving to Houston as many oil companies do, Marathon Petroleum stayed true to its “Ohio Oil Company” roots and maintains its headquarters in Findlay, Ohio today.

Though Standard Oil was dissolved in 1911, it was the foundation for today’s oil industry and spawned some of the largest companies the world has ever seen.