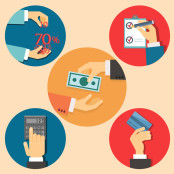 An interesting week lies ahead of us; Greece continues debt talks with a payment due to the IMF on Friday, while the European Central Bank meets throughout the week. Friday is set to show the U.S. Jobs report, and OPEC will also meet at the end of the week.

On Monday morning, Mesa Laboratories Inc. (MLAB ) reported its quarterly earnings with a Q4 EPS of $0.80, $0.11 worse than the analyst estimate of $0.91. Revenue for the quarter came in at $18.56 million versus the $15.71 million reported in the same period last year.

ISM manufacturing was higher with an actualized number of 49.5 from an estimated 43.0. Its previous reporting was 40.5.

IBD and TIPP announce Economic Optimism. Above 50.0 indicates optimism, below indicates pessimism. The forecast calls for 49.8—up from last month’s 49.7.

Total Vehicle Sales will be reported as well—the estimate calls for 17 million vehicles, up from 16.5 million last month.

On Wednesday before the bell we will see non-farm related employment numbers, trade balances as well as crude oil inventories.

Before noon ISM Non-Manufacturing PMI will announces its numbers. Last month they sat in with 57.8, this month the forecast appears to be 57.1.

Beige book news will be released.

Before the bell Thursday we will see Unemployment Claims numbers. Last month 282,000 were reported, and the forecast calls for 279,000.

Friday morning look for the employment report. Last month unemployment sat at 5.4%—numbers are predicted to stay the same this month.

In the afternoon, the consumer credit reports will be released.

The week looks to be a bit unpredictable and potentially turbulent. In the oil market, traders will be watching Friday’s OPEC meeting with great interest, however, output is not expected to change in the coming days. Greece owes $329 million in their next payment to the IMF. However, the IMF could be open to bundled payments in order avoid Greece potentially missing a payment on June 5—the caveat is that Greece will need to formally ask for an extension.