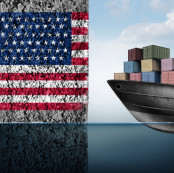 Trade War Is Bad for the U.S. Economy but Not for U.S. Steel

Despite economists saying this protectionist trade policy will cost the U.S. economy thousands of jobs and may even start a global trade war that could slow economic growth both in the U.S. and abroad, the steel industry in the United States will certainly get a leg-up in the short run, and one of the biggest winners of this policy shift is likely to be Pittsburgh-based U.S. Steel Corporation (X ).

When President Donald Trump was talking about imposing import tariffs on steel at his campaign rallies, political analysts believed it was just a political promise that would never get implemented because his own party, the conservative GOP establishment, would not be onboard as it goes against the basic notion of a free market and would be truly detrimental for the U.S. economy.

However, President Trump proved his skeptics wrong and started moving the United States from being a staunch advocate of free trade to a protectionist country by imposing tariffs on Chinese solar panels and South Korean washing machines in January 2018. However, tariffs made headlines in early March, when President Trump fulfilled one of his campaign promises and finally slapped a 25 % tariff on imported steel.

The idea behind imposing tariffs on imported steel was to reduce the trade deficit with China, but the fact is that China supplies less than 5% of the steel used in the United States. By contrast, imposing tariffs on steel will hurt close strategic allies of the United States, like Canada, Brazil, South Korea, Mexico, Russia and Japan, as these countries ship the bulk of imported steel into the U.S.

Since mid-February, volatility has kicked into high gear and it’s causing many investors to panic and flee to cash. Get some practical advice here on how to navigate the market’s ups and downs.

To read the Full Story, Go Premium or Log in

The Market Wrap for January 17: Phase One Is in the Books

The week marked the official signing and agreement on the so-called Phase One...

Walgreens Boots Alliance has taken the first spot in the list as the...