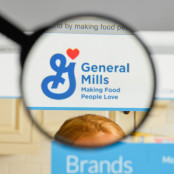 This week, General Mills trended the most as the food company’s stock dropped on a potentially dilutive deal that disappointed investors. Second in the trends list is Facebook, unsurprisingly given that the firm has been in hot water of late due to a data breach. The list is closed by two ETFs tracking the total stock market and high dividend yield companies.

Cereals maker General Mills (GIS) has seen its viewership rise as much as 201% in the past week, as the company prepares to issue new stock to finance its foray into the pet food market.

It seems that investors are not very excited about General Mills’ acquisition of Blue Buffalo Pet Products (BUFF) for $8 billion, as the stock has dropped around 14% since the deal was announced at the end of February. One of the reasons lies in the fact that General Mills (GIS ) will issue $1 billion worth of new shares to finance the all-cash transaction, effectively diluting existing shareholders.

However, the venture into the pet food market might be timely for General Mills as it looks for new ways to grow its bottom and top lines. General Mills’ existing business lines generate little to no growth, in contrast to the pet food market, which swells by around 4% per year. Indeed, Blue Buffalo’s revenues have increased by a compounded annual rate of 12% in the past three years, as the company has a strong position in the high-end pet food market.

Still, the market’s negative reaction to the acquisition might have to do with the rich valuation attributed to Blue Buffalo at a price-to-earnings ratio of 41. If Blue Buffalo continues to grow its revenues at the same pace in the coming years, the valuation would be justified. General Mills would hit trouble should the income stagnate, a possible scenario in case of slower economic growth.

General Mills pays an annual dividend of $1.96 per share, representing a strong yield of 4.4%. The company is on track to hand out its next quarterly payment on April 9.

Social media juggernaut Facebook (FB) has seen its traffic surge 181% in the past week, as the company scrambles to contain the damage from a data breach scandal. In the latest development, Facebook (FB) upgraded its privacy settings, giving users greater control over their data and easier access to the settings. The company will allow users to delete their entire history from their profiles, choose to download their information and even transfer it to other services.

The move is an evident attempt to regain the trust of consumers, who have expressed their disappointment over the fact that Cambridge Analytica used 50 million user profiles without their permission to help the Trump campaign gain an edge in the 2016 U.S. elections. Voices calling on users to remove Facebook increased in the aftermath of the scandal.

Thus, the company’s shares have dropped 8% in the past five days, extending year-to-date losses to 13%. The company’s CEO, Mark Zuckerberg, promised to better safeguard user content and he is expected to testify soon before U.S. Congress, while two of Zuckerberg’s lieutenants will testify in the UK.

Facebook’s charm offensive comes as the firm faces increased scrutiny in Europe, where the regulatory environment is getting more difficult. The company made it clear that the new privacy rules are also designed to comply with tougher European regulations. It remains to be seen whether the strategy will prove enough to make both users and the market happy.

U.S. President Donald Trump promised to impose tariffs on $60 billion of Chinese goods to reduce the country’s large trade deficit. The move prompted condemnation from China, which said that it would strike back by slapping its own tariffs on American goods, particularly in the agricultural sector. The market took the news badly, with Vanguard Total Stock Market falling nearly 2% in the past five days. For the past 30 days, Vanguard Total Stock Market, which has a dividend yield of 1.7%, has dropped nearly 4%.

This week, General Mills trended as the market dislikes a potential overpriced acquisition of Blue Buffalo Pet Products, which might lead to dilution given that part of the deal is financed with newly issued stock. Facebook, meanwhile, is trying to regain consumers’ trust – after a data breach scandal – by upgrading its privacy settings. The broad market, Vanguard Total Stock Market, has suffered of late due to fears of global trade, while Vanguard High Dividend Yield has outperformed in the past five days.