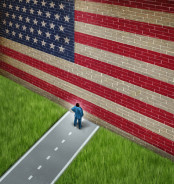 The Market Wrap for August 25: Indifference Toward Politics

Optimism started dominating the equities markets this week despite concerns about the continued slowdown in the housing sector and a possible government shutdown due to the debt ceiling issue in October.

After trading sideways on Monday, the Dow Jones jumped almost 200 points, the biggest one-day gain in months, when news broke out on Tuesday that Trump’s aides have made notable headway along with Congressional leaders on creating the much-awaited tax-reform plan. The bullish bias among investors was once again confirmed when the markets continued to trade sideways, disregarding the remarks from President Donald Trump that he would support a government shutdown unless lawmakers fund the building of a wall with Mexico.

Besides learning to ignore the president’s outbursts, like linking one of his political promises to shutting down the entire U.S. government, investors also overlooked lower-than-expected new and existing home sales. Furthermore, after Lowe’s (LOW ) lower-than-expected earnings and Sears (SHLD ) closing down another 28 stores amid declining sales, concerns about the potential loss of retail sector jobs kept the major equity indices from making additional gains later in the week.

There are valid concerns about the economy, but investors should continue to expect optimism and a measured response from the markets regarding political upheavals in coming days.

Be sure to check out our previous week’s edition here, wherein traders were focused on the Fed’s interest rate guidance.

Check out the latest update of Best Dividend Stocks List, wherein a leading...

In the end, the market continued its ebb and flow as traders viewed...