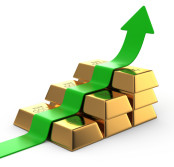 No central theme could be identified this week in our disparate trends list. The interest of our readers has ranged from dividend gold companies to technology icon Apple (AAPL ). And in the middle of our top, there is real estate company Realty Income (O ) and the tobacco and cigarette corporation Altria Group (MO ).

Gold mining companies have finally received good news over the past several months with gold prices staging a recovery following three years of steady declines. This past week, the page tracking best dividend gold stocks saw its viewership rise as much as 32%, compared to the week-ago period. The interest in these companies has been mostly due to increased volatility in gold prices, reflecting an eventful past week. The possibility of Great Britain leaving the EU has put investors on guard, although latest polls show the “Remain” camp is gaining ground again. In addition, the shiny metal had risen more than 2% in the aftermath of the Federal Reserve’s decision to leave interest rates unchanged, but it trimmed almost all gains by the end of the week.

Gold’s volatility has had an impact on the performance of companies digging the shiny metal out of the ground. One of the best-paying dividend stock firms, Nevsun Resources (NSU), has seen its shares fall about 14% in the past week – although the slide is attributed to other factors. Nevsun, which pays an annual dividend yield of 4.65%, agreed to increase the cash component for the acquisition of peer Reservoir Minerals, after a large shareholder opposed the initial terms of the deal. Evidently, investors did not like the news, but the transaction has been approved by investors of both companies. Despite the recent fall, Nevsun is still up 11% since the beginning of the year on the New York Stock Exchange.

There is little doubt as to why real estate investment company Realty Income has garnered our readers’ interest over the past week, registering a 14% rise in viewership. The $16 billion market-cap REIT has increased its dividend payout for the 86th time since it was first floated twenty-two years ago. On June 14, the company said it will raise its monthly cash dividend to $0.1995 per share from $0.199 previously, or to an annualized $2.39 from $2.38. Realty Income now yields a dividend of 3.74% annually. Despite the good news, the stock has fallen about 1.6% over the past five days, but its year-to-date performance remains in positive territory, up more than 24%.

Realty Income is perhaps one of the best REITs in the space to hold for long periods, averaging a total annual return of more than 16% since inception. The company has delivered these outstanding shareholder returns thanks to its diversification and conservative strategy. It has properties in 49 states in the US, and usually rents places to stable blue-chip businesses, such as Walgreens (WBA ) and FedEx % dividend FDX }. As a result, its tenant-occupancy rate has never dropped below 96.

Our page tracking tobacco holding company Altria Group has seen its traffic rise over 14% in the past week on expectations the company might increase its dividend this summer, just as it has done in previous years. Altria’s main holding is its wholly-owned subsidiary Philip Morris USA (PM ), which is responsible for producing and marketing tobacco products strictly in the US. Stable growth in that business – as well as a sizable minority stake in beer-maker SABMiller – has helped the company’s stock rise more than 12% since the beginning of the year.

SABMiller agreed to be acquired by Anheuser-Busch InBev (BUD ) in a deal that will give Altria a 10% stake in the combined entity and $2.5 billion in cash, which could be used by the company either to pay a special dividend or repurchase shares. The deal, which is expected to close by the second half of this year, is pending regulatory approval in certain markets, including the US and China.

Altria has nearly doubled its dividend since the financial crisis, and now hands out an annual payout of $2.26 per share, representing a yield of 3.46%.

Apple: Having a Hard Time in China

An article titled Who Owns Apple from less than two years ago has taken the fourth spot on our list of trends, with an 11% increase in traffic. The article highlights the amount of shares important Apple insiders owned at the time. Since that date, the top has not changed, with one exception – Robert Mansfield exited the list. He retired as Senior Vice President of Hardware Engineering in 2012 and subsequently sold his holdings. Chairman Arthur Levinson remains the top holder in the firm with 1.1 million shares, closely followed by CEO Tim Cook with a little more than 1 million units.

Apple’s stock has tumbled over 3% in the past five days, as the company’s foray into the Chinese market experienced a fresh setback. The Beijing Intellectual Property Office ruled last week that the company’s flagship product – the iPhone 6 / iPhone 6Plus – violated a patent of little-known local smartphone maker, Shenzhen Baili. Apple said it will defend the ruling in Court and will be allowed to sell the phone models until a final decision is reached, which could be four or five years away.

Shares in Apple, which yields an annual dividend of 2.39%, are down nearly 10% since the beginning of the year.

This week, gold dividend stocks have taken the first spot on our list, largely thanks to volatility in the shiny commodity following the Federal Reserve’s decision to keep interest rates unchanged. Real estate company Realty Income and tobacco firm Altria Group have both made it on our list because of good stock performance and rising stable dividends. Meanwhile, Apple has been in the spotlight with a legal setback in China, which threatens its expansion plans in the country.