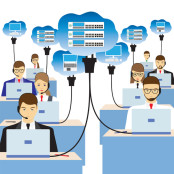 Trending on Dividend.com: All Eyes Are on Earnings of Dividend Technology Stocks

Dividend.com analyzes the search patterns of our visitors each week. By sharing these trends with our readers, we hope to provide insights into what the financial world is concerned about and how to position your portfolio in response.

As the earnings season is underway, the attention of our readers has been mainly on stocks offering good dividend payouts and protection from volatility. AT&T (T ), Verizon (VZ ) and General Electric (GE ), three companies offering one of the best dividends in the space, made it to our list of most visited pages. Meanwhile, Apple’s (AAPL ) page has also been visited by our readers, but for different reasons, while Dow 30 Dividend Stocks garnered interest for the index’s performance.

AT&T: Preparing for the Future

Telecom giant AT&T has topped our list of most popular dividend stocks this week, with the viewership increasing 9.82% week-over-week. The interest of our readers in the Dallas, Texas-based telecommunications company is hardly surprising given its healthy annual dividend and the earnings report it released on April 26.

Shares spiked about 1% on Wednesday, as investors attempted to make sense of the numbers the company had just released, which were mixed. While the company’s revenues grew about 24% compared to the same period last year, it acknowledged that was mostly due to the acquisition of DirecTV. The company has successfully managed to lower costs and improve margins, but that positive development pales in the face of the facts that the company lost 363,000 customers for its wireless service and its video segment has not performed well. Still, the company is not sitting on its past laurels and is apparently doubling down on the Internet of Things, a new promising area that could boost returns. In an interview, the company’s Vice President, Chris Penrose said Internet of Things was a top priority for the company.

AT&T is paying an annual dividend of nearly 5%, which is one percentage point higher than the average of technology companies. On top of the dividend, the company’s stock has steadily grown over the past five years about 25%. Mostly a defensive stock, the company offers a good hideout during periods of uncertainty, but could also be a good long-term play, if history is any guide.

Apple: A Temporary Glitch or a Fundamental Change

The largest company in the world by market capitalization, Apple had its first setback in more than thirteen years on Wednesday after it reported its first revenue decline since 2003. And when its most effervescent supporter, Carl Icahn, announced he had dumped his giant $5 billion stake two days later, it became clear that the company faces a small storm of sorts. Apple’s woes have apparently attracted viewers to our page, which saw its traffic increase 72% week-over-week. The company’s stock is down over 10% since last Friday, with most of the fall occurring immediately after the earnings report was released. Icahn’s selling activity also weighed on the stock, which shed another 3% on Thursday after the announcement.

In all likelihood, these two developments have prompted investors to rethink the company’s long-term prospects, as China is becoming an increasingly important driver for growth. But China is volatile, particularly in this period. And even if the country overcomes macroeconomic difficulties, Apple could be hindered by the government to conduct its business there, as Icahn himself had acknowledged.

The operating environment is becoming tougher for the company, which pays an annual dividend of 2.40%. But as in previous selloffs, the current problems could prove temporary, and the company may resume its revenue growth. Still, unless the company releases a new revolutionary product, the return to growth will hinge on China.

Our page tracking the most solid blue chip dividend stocks has taken the third spot in our weekly list, showing an increase of 8% week-over-week, as most companies in the index have already released or are about to release their financial results for the first quarter of the year.

Blue chip stocks are experiencing renewed interest from investors, given the uncertainty around China and the rising interest rate environment. Many of the Dow 30 components are considered at least partly defensive, meaning they perform better than the rest of the market during rising interest rate periods or macroeconomic headwinds. For instance, Dow Jones Industrial Average (DJI) has beaten the broader S&P 500 index by nearly one percentage point since the beginning of the year. Considering the dividend payouts, the total return of DJI is double than that of S&P, with the latter returning 3% year-to-date.

General Electric reported its financial results on April 22, posting earnings per share of $0.21 per unit, which was in line with market expectations. The stock fell as a result about 2.3% on the opening the day after but recovered almost all losses since then. Primarily a defensive stock paying a good annual dividend of 3%, General Electric has attracted readers to our page, which saw an increase of over 25% week-over-week.

The quarterly results look good, particularly given the company’s transition to a purely industrial company from a conglomerate operating in industries as diverse as aircraft and financial services. The company is on its way to shrinking its financial arm, and returning the proceeds to shareholders. So far, the company has returned $33 billion to investors.

Verizon: A Good Thing and a Bad Thing

Unlike other dividend stocks that attracted readers mainly for their earnings reports, Verizon has been in the spotlight lately for reasons other than financial results. The telecom company reported earnings in line with expectations on April 21, but a union strike and its endeavor to acquire the core business of Yahoo! (YHOO) have grabbed the headlines. As a result, the page tracking Verizon saw an increase in viewership of 25%.

Negotiations with unions are still on-going, with Verizon recently putting its best offer on the table of a 7.5% wage increase. If the sides fail to reach an agreement, the strike could negatively impact earnings for 2016, according to Chief Financial Officer Fran Shammo. But not all is gloomy for the company. The telecom giant has the upper hand on acquiring the core business of Yahoo!, which could improve earnings if a deal is reached. By combining Yahoo! and AOL (AOL) under the same corporate umbrella, Verizon is sure to achieve important synergies and cost cuts.

This week defensive stocks such as General Electric, Verizon, and AT&T were on the minds of our readers for their healthy dividends and because all of them reported their quarterly earnings. But the earnings report that brought most of the question marks was Apple’s. The California, Cupertino-based technology firm reported its first revenue decline in thirteen years, justifying a spike in viewership. Dow 30 Dividend Stocks has taken the first place in our top, as investors look for defense against volatility.