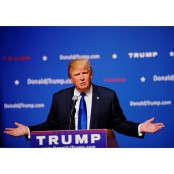 Your Dividend Portfolio: What If Donald Trump Were President?

Editor’s note: This is one of two columns that examine how the election of Hillary Clinton or Donald Trump might affect an investor’s dividend-oriented portfolio.

Love him or hate him—and there are millions of Americans in each camp—New York real estate mogul Donald J. Trump owes much of his popularity to his unflinching willingness to tell it as he sees it. What he sees is an America on the wrong path, and his core message is that he wants to make the nation great again.

Trump hasn’t much discussed the policy specifics he will employ to reach his desired goal—a trait which proves his unfitness for office in the eyes of critics and which endears him to supporters who like his clear talk about the nation’s problems and find his lack of wonkiness about policy matters a welcome change from professional politicians.

The one policy area where Trump has been specific has been in tax reform, and it is in his plan for tax change where we see most clearly what a Trump presidency might mean for dividend investors.

For all taxpayers, deductions for mortgage interest and charitable donations would remain in place.

Under the Trump plan, there would be no estate tax and the highest corporate tax rate would 15%, which he says would end corporate inversions and encourage business investment in the U.S. He would allow U.S. corporations to bring home cash currently held overseas at a one-time tax rate of 10%. At least a part of all that cash, as well as the potentially greater sums hitting the bottom line due to lower taxes, could potentially flow to dividend investors if that portion of the Trump tax plan were to become law.

Trump said that highly regarded economists helped him design his plan, which he says would provide tax relief for the middle-class, simplify the tax code, encourage economic growth and not add to the national debt or the deficit. Under the Trump plan, the tax cuts would be paid for by eliminating loopholes affecting the very wealthy, such as the tax exemption for life insurance interest and the tax treatment of carried interest for private equity and hedge fund principals.

The Trump plan contains elements that appeal to both the right and the left. For the right, its four brackets and its elimination of many deductions represent a major effort to simplify our byzantine tax code, as well as a significant step toward flatter taxes. For the left, eliminating the income tax on lower earning workers and closing loopholes for the wealthy are similarly attractive.

However, Kyle Pomerleau, an economist with the non-partisan Tax Foundation, told FoxNews.com that “it’s hard to see how the plan would reach revenue neutrality,” citing the rate cuts Trump proposes. “Getting rid of the carried interest loophole would raise about $1 billion,” Pomerleau told theatlantic.com, while the individual tax cuts alone would result in about $100 billion less revenue for the government.

Douglas Holtz-Eakin, president of the American Action Forum and a former director of the Congressional Budget Office, told FoxNews.com that tax reform plans typically involve lowering rates and broadening the base. “Trump is lowering the rate and narrowing the base,” he said.

Simply put, Trump’s plan to lower the tax rate paid by American’s wealthiest citizens likely would not be revenue-neutral for the federal government, and in fact would likely increase the deficit unless economic growth took off to an unprecedented degree and/or Trump changes his plans to increase military spending significantly.

To be sure, any tax plan proposed by any potential president rarely is adopted and enacted as-is by Congress. And given the rabid partisanship in Washington, Trump’s plan—even if Republicans were to continue their majorities in the House and Senate—probably would not emerge unscathed. That said, the Trump tax agenda is generally one that most Republicans would support in principle, and if largely adopted, would be a boost for dividend-paying stocks and for the owners of those stocks.

For an analysis of how Hillary Clinton’s presidency would affect your dividend portfolio, click here.