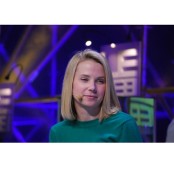 The C-Suite at Yahoo

In our last post on Yahoo we covered 7 things that Yahoo needs to be doing in order to make itself relevant again from a product perspective. While Yahoo management may or may not undertake all of it, it is certain that the company needs strong leadership. There is perhaps no other executive who has had her every move questioned despite her company’s stock doing well than Marissa Mayer

Under her leadership the stock has nearly doubled in just 3 years. For any CEO that is remarkable, in Yahoo’s case however a big chunk of it was expected, given its stake in Alibaba and the stock being used as a proxy until the IPO. That said, Mayer joined in 2012, and it should have given her enough time to organize a revenue roadmap around Yahoo’s strengths. It has been one year since the Alibaba IPO and while plan A may have been to use proceeds from the sale of Alibaba’s stock to give a one time special dividend or buyback stock and then reinvest remaining proceeds in the content business, there was no plan B and that leads us to the c-suite.

Marissa Mayer’s severance pay is nothing short of obscene, especially for an organization that is as bloated as Yahoo. Compare that to Nikesh Arora over at Softbank who was forced to purchase $300M+ worth of shares (by taking personal debt) and you will get the difference. Granted, neither of them are founders and Marissa Mayer was a senior level executive at Google having enough experience to perhaps one day have become senior management at Alphabet focusing solely on products. In addition, there is no question about her talent or integrity, however if the board’s hand (for keeping Marissa Mayer at the helm) is being forced by her contract instead of their choice, it is perhaps the board that is more incompetent than Marissa Mayer after having gone through 6 CEOs in the last 7 years.

There shouldn’t be as much concern from activist investors on why management blew through $1.1B buying Tumblr, because the company also made 30X that amount on Alibaba. They should be more concerned about the board.

Where is Marissa Mayer

Ironically, Marissa Mayer has done everything but BE Marissa Mayer. She followed Starboard’s roadmap until the IRS came along, she gave into the notion of investing in original content which seems to have fuelled by ex CMO Kathy Savitt who has extensive experience at Amazon & her namesake agency – but that experience happens to be in media and PR, not technology or logistics. Mayer on the other hand is tech heavy, products are her core strength. She has actual programming experience. She understands platforms. At Google, she headed search products and user experience, the very foundation of Google.

However, since her so called demotion to local products at Google, Mayer seems to have for reasons unknown obsessively focused on content. Buying Zagat at Google and then continuing to run Yahoo as a content company, when the latter still has audiences that can be translated into revenues through platforms.

Common logic might have dictated same revenue stream – advertising, but Google’s ad business is all about intent whereas Yahoo’s is more about awareness. Simply having high value content is not going to increase revenues, if anything ad revenues (existing and future) need to be reinvested into products, Marissa Mayer’s original strength.

There is no quick fix here. However Eric Jackson’s plan does seem to create more value. Starboard and Dan Loeb have been flirting with the Yahoo board for some time, and that has amounted to well…nothing. In addition, as Eric Jackson points out several buyers have come and gone for Yahoo in the past decade having tried to acquire Yahoo at a huge discount. That latter part needs to change and for shareholders the best possible scenario is a mixture of Mr. Jackson and the company’s plans backed by Mr. Loeb.

Selling all of Yahoo’s Core while leaving it’s holdings in Yahoo Japan and Alibaba intact makes no sense. In such a scenario shareholders would not only be selling the core business but they would also likely retain tax liabilities in Yahoo’s holdings, making the deal redundant unless the core business was sold for $10B or more – (in a pure apples to apples comparison the amount of taxes shareholders would owe is $10B, therefore for a sale to be materially beneficial on a cash basis, Yahoo Core needs to be sold for more than this amount).

Given the size of the transaction and the uncertainty surrounding Yahoo’s products the chances appear rather slim.

Choosing between a rock and a hard place

Doing a reverse spin by including the Core & Yahoo Japan & leaving the Alibaba stake in the current company does make some sense. However as Mr. Jackson points out there is a downside risk in that Yahoo shareholders would probably owe capital gains on both the Core & the Alibaba stake. Having said that, management needs to definitively seek an opinion on the viability of such a transaction from a tax perspective.

At the same time it needs to undertake divestitures (original content, display ads), write-downs, a big cost cutting program with at-least 7,000 layoffs and reinvest in verticals such as sports & finance until a serious buyer shows up for the company or it’s operating metrics start to dramatically improve. If the reverse spin is not beneficial, Yahoo’s businesses would be on their recovery path and if the reverse spin does end up being definitively beneficial it almost certainly would give Yahoo Core an additional premium.

Marissa Mayer is still the right person if she can find herself. If not, it is probably in the best interest of the company to let her go. Make no mistake, Yahoo is not unfixable. It has been run into the ground by management teams who had little interest in seeing the company work. Marissa Mayer is certainly better than her predecessors.

Mayer is not lost at sea but she is having a rather terrible cruise, lets just hope for the sake of Yahoo shareholders that she doesn’t hit an iceberg.