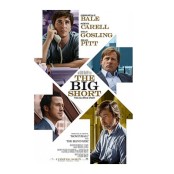 The recently released movie “The Big Short” details investor Michael Burry’s legendary trade that is the subject of the film. He was one of the very few investors to understand that the U.S. housing market was a house of cards, which was set to fall in 2008. Sure enough, the subprime mortgage market soon crashed, sending major American banks and the U.S. financial system as a whole toward the brink of collapse.

Dividend.com discusses Burry’s investing success that made him the subject of the book and film, and why water utilities should be considered top dividend stocks going forward.

Burry began taking a close look at the U.S. mortgage market in 2005. In particular, he took great interest in what was going on in the subprime sector of the market. Banks were steadily loosening their lending standards for years and giving out loans to borrowers who should not have been deemed credit-worthy. In turn, potential home buyers were eager to buy homes because of the strong performance of the U.S. housing market in the years leading up to the crisis.

This led to perilous lending. Consumers with poor credit histories were getting sizable mortgages with little to no money down, adjustable interest rates or interest-only loans. Burry predicted that the bonds created to securitize these mortgages would soon crash. He acted on his thesis, going short the market through a series of credit default swaps against subprime mortgages. This one trade netted $1 billion.

The last line of the movie, printed on a placard, is “Michael Burry is focusing all of his trading on one commodity: Water.”

It is easy to see why Burry likes the idea of investing in water. The world’s resources are scarce, and there is perhaps no resource more vital to human life than water. Plus, many water utilities are regulated, similar to their electricity utility peers, which allows them to pass along regular rate increases on an annual basis. This gives them a steady stream of earnings growth from year to year, which is then passed through to shareholders as dividends.

These five water utilities allow an investor exposure to investing in water, and each of them pays a significant dividend to shareholders.

Aqua America (WTR) grew revenue and earnings per share by 4.7% and 9%, respectively, through the first half of the year. In August, Aqua America increased its dividend payout by 7.9%, and the stock now yields 2.4%. Aqua America has paid a quarterly cash dividend for 70 years and has come through with 25 dividend increases in the past 24 years.

California Water Services Group (CWT ) yields 2.9% right now and has paid more than 280 consecutive quarterly dividends. Moreover, the company has increased its dividend for an impressive 48 years in a row. California Water Service reported flat earnings per share over the first half of the year, but its $0.21 per share in profits last quarter was more than enough to cover its $0.168 per share quarterly dividend.

York Water (YORW ) York Water serves 47 municipalities and an estimated population of 180,000, through approximately 64,000 service connections. Its fundamentals are strong. Over the first nine months of 2015, revenue and earnings per share grew 3% and 14%, respectively.

In 2015, York Water raised its quarterly dividend by 4%, to $0.1555 per share. That comes out to $0.62 per share annually, a 2.7% yield based on the stock’s recent closing price. York has paid consecutive dividends for 200 years, dating all the way back to York’s first quarterly dividend payment in 1816. It has also raised its dividend for 19 years in a row. According to the company, York Water is believed to have the longest track record of consecutive dividend payment of any company in the United States.

Michael Burry, the hedge fund manager made famous by his prediction that the U.S. housing market was set to crash just before the Great Recession hit, has set his sights on a new target. He is focusing his trading on water, which makes a lot of sense. Water is a matter of national security and necessary for human life. Going forward, Burry is focusing on the transportation of food from water-rich areas to water-poor areas.

The five water utilities listed above are involved in the transportation of water. All five companies are solidly profitable, and their business models are highly secure. After all, it is not like human beings will simply be able to stop drinking water anytime soon. As a result, their dividends appear secure, and they should continue to do well for many years.