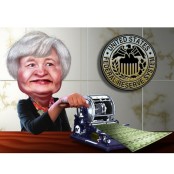 Investors may actually get a lump of coal in their stockings this December. It’s shaping up to be a real cruel month. This past week, stocks continued their downtrend as a multitude of factors pushed down indexes. One of the chief concerns this week was energy stocks. Lower oil prices, continued production from OPEC and some dividend cuts at pipeline superstar Kinder Morgan (KMI ) and explorer Freeport-McMoRan (FCX ) helped push down energy shares—which helped send down major indexes for the week.

Not helping was the threat of the pending rate hike next week from the Federal Reserve; even though it was roughly five years in the making, traders and investors still remain on edge about the Fed.

Add to this the lack of positive earnings guidance coming from those few firms that reported this week and it made for a messy trading environment. It’s also helping to cause 2015 to be a stinker of a year.