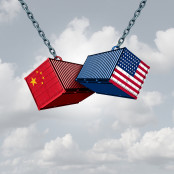 The Market Wrap for August 9: The Trade War Escalates, Again

An old foe gnashed its teeth this week in one of the most volatile series of trading sessions since the depths of the Great Recession. The trade war has taken on new urgency as the rhetoric has turned into direct policy points, and not in a good way. Both the U.S. and China have been stymied on a deal, with President Trump turning up his criticism and the potential for new tariffs. This week, it was China’s turn to ratchet up the trade skirmish. Beijing decided to let its currency float to near historic low levels. This prompted retaliation from the Trump administration.

What it really did was drop stocks and create an overall volatile trading environment throughout the week.

This volatility spilled over into the various earnings reports announced during the week. Stocks have continued to report decent current earnings; however, guidance figures remain very cautious. Meanwhile, those stocks that did not meet or beat expectations were punished severely. Traders simply sold shares and flew to safety.

With the lack of economic data – and already released data coming in poor – investors simply reacted to the trade war news as it came in. And in that, stocks spent much of the week rising and falling with great magnitude.

Be sure to check out our previous Wrap here, when the Fed finally made its decision.