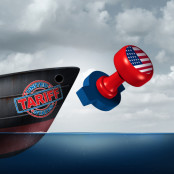 The Memorial Day holiday kept markets trading sideways early in the week, and dropping bond rates prompted investors to turn bullish later on. However, once the U.S. imposed tariffs on the EU, Canada and Mexico, it abruptly ended the bullish momentum.

Once the 10-year Treasury rate fell close to 2.8%, analysts got excited that stocks will surely turn bullish – and they did. Most economic data released this week also supported a broader bullish thesis based on overall improving macroeconomic metrics like jobless claims data and improving consumer spending. However, once the Trump administration announced it will put steel and aluminum tariffs on its strategic allies – including Canada, Mexico and the European Union – all bets were off and stocks dropped sharply.

To conclude, there was plenty of positive news this week to feel optimistic about the stock market, but it seems the current administration would rather provide preferential treatment to certain industries instead of considering what is good for the entire economy.

Be sure to check out our previous week’s edition here, in which investors focused on easing concerns about the trade war with China.

Implications of COVID-19 on Banking Stocks

Thanks to the COVID-19 crisis, banks have been hit on a variety of...