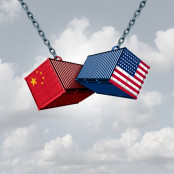 No Trade War, Thank You

You have to give President Trump credit. He really sticks to his guns and edict about putting “America First.”

This comes across in a variety of his administration’s policies. And one of the biggest areas that he’s pushed his policies happens to be trade. From looking to negotiate previously announced deals to canceling trade bargains, Trump’s goal is to make it fairer for American businesses.

But, while his intentions seem good, he may be doing a bit more harm than good.

And that seems to be the market’s reaction to the latest round of tariffs and attacks against the United State’s major trade partner China. Since announcing sweeping tariffs, the market’s response has been to boost volatility and send shares lower. The reality is, no one ever wins in a trade war and investors need to plan accordingly.

The Market Wrap for July 3: A Great Start for the New Quarter

In the end, stocks rose, finished one of their best quarters in recent...

Thematic fund research based on proprietary analytics from CFRA

For investors seeking income, the time to bet big on Europe could be...