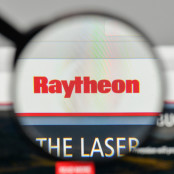 Raytheon Breaks Into Top 50 on Most Watched Stocks List

Back in October of last year, Raytheon was ranked at the 55th spot. As the aerospace & defense sector is back in the news after recent unfortunate events, Raytheon has broke into the top 50 list for the first time.

Last week the stock moved two places to move to the 49th position. Raytheon recently touched a new all-time high of $219.86. This has made the stock significantly unattractive on the yield front as it now stands at a 1.45% forward dividend yield. Based on historical dividend increases and the current economic and political environment, one can easily expect a 10% hike in its next payout. Congress is close to passing a budget deal that would boost defense spending. Raytheon, which specializes in aircraft and missiles, should benefit due to political tailwinds.

Other stocks that moved up on the list include monthly dividend payer Main Street Capital Corp, which now sits in 47th position. Honeywell, another major aerospace & defense giant moved up two places on the back of continued investor interest in the aerospace & defense space. UPS, which recently got hammered by investors after Amazon revealed that they are building their own logistics system, also moved up two places on the list as investors might have viewed the stock to be oversold. UPS’s recent drop in share price has pushed its yield to 3.37%, which is the highest it has been in the last 5 years.

Our Most Watched Stocks List is a user-generated, interest-based ranking of dividend-paying stocks, giving you a real-time snapshot of buying interest in the market. Generated by our Premium members’ watchlists, it’s aggregated and ranked by the most watched criteria.

The list has been designed to help income investors navigate the top dividend stocks being tracked by one of the world’s most advanced investing communities.