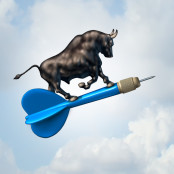 This week, investors were greeted with an old foe: the Federal Reserve.

Traders were focused on the latest FOMC meeting and what the central bank would do with benchmark interest rates. Economic data and inflation numbers haven’t been that stellar lately and traders were split on how the Fed would react. There was a sense of relief once Janet Yellen & Company decided to leave rates as is.

With that out of the way, the rest of the week’s data seems to support a bullish prognosis for the economy. Labor, manufacturing and consumer confidence all rose. As did earnings.

With earnings season underway, so far corporate profits have been great, and we’ve seen better revenues from a variety of firms. This is a reverse of what we’ve seen the last few earnings seasons where sales haven’t kept up with profits.

All in all, the Fed, bullish data and better-than-expected earnings continued to prop up the markets throughout the week.

Stocks entered the new week on a down note for the third straight day of declines. The culprit was the uncertainty over the Federal Reserve’s actions. Data has remained bullish, but with a large side of caution. As a result, traders were unsure how the Fed would react this week. There certainly was a case for raising or keeping rates the same. And if there’s one thing Wall Street hates, it’s uncertainty. With that, lower share volumes caused most investors to abandon stocks on the day.

Check out the latest update of Best Dividend Stocks List, wherein a confectionery...