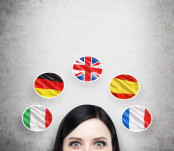 Dividend.com’s Foreign Dividend Stocks page tracks companies that are based outside the United States but have shares that trade on U.S. exchanges. These shares are called ADRs (American Depository Receipts).

Foreign stocks have long captured the imagination of investors. The ability to capitalize on overseas markets can offer tremendous diversification benefits for market participants seeking to maximize yield in a low-growth domestic market. Although U.S. investors have a lot to be thankful for since the presidential election, having at least some foreign exposure is rarely a bad idea.

While investing abroad can result in high yields, it also requires a steady hand and an understanding of both the risks and opportunities of international markets.

As the chart above clearly illustrates, dividend yields are much higher abroad than in the U.S. In theory, developed economies have higher yields than their emerging market counterparts, given the size, penetration and maturity of their respective industries. Strong, stable companies are in a better position to declare higher payouts.

This is certainly the case for the Group of 20, a self-appointed international forum for 20 major economies. As of early 2017, Italy tops the list with the highest yield, followed by Australia, the United Kingdom, Russia and the European Union. The United States is in the bottom half of the list with an average dividend yield of 2.02%. Although its position improved by one compared to a year ago, average yields have decreased by 21 basis points over that period.

From our universe of 297 foreign dividend stocks, we have concentrated on five companies that yield over 4.5%. They are presented below. Each of these companies has been a dividend payer for at least five years and has an average five-year dividend growth rate of more than 0%.

Stay up to date with the highest-yielding stocks and their latest ex-dividend dates on our High Dividend Stocks By Yield page.

Royal Bank of Canada (RY ) is Canada’s largest bank by market capitalization. It is also among an elite list of financial institutions to have paid out a dividend for over 100 years. To learn more, read 5 Canadian Companies That Have Paid a Dividend for Over 100 Years.

RY yields 4.97% as it pays out $3.48 annually. It trades at a P/E ratio of $12.72, based on 2017 earnings. RY enjoys a sizable share of Canada’s banking industry, and is making significant inroads into the U.S. market. This gives the bank solid growth prospects at home and south of the border.

BP PLC (BP ) is one of the world’s largest oil and gas producers. Based in the United Kingdom, the company provides its customers with fuel for transportation, energy for heat and petrochemical products for a variety of industrial purposes. The company operates two dedicated business segments: exploration and production, and refining and marketing.

BP’s dividend yield has declined to 6.89% from 7.59% a year ago. The annualized payout for BP at present stands at $2.38. The company’s share price has weakened since the start of the oil-price collapse. However, its investment in renewable energy puts it in a good position to leverage future demand drivers in the global market.

Royal Dutch Shell (RDS-A ) is another energy leader that offers a significant yield. At 7.22%, the company’s dividend is nearly three times bigger than the average for basic materials. It also boasts an annualized payout of $3.76, which is paid quarterly.

The British-Dutch multinational is headquartered in the Netherlands and incorporated in the UK. Despite the recent market crash, the company has enormous growth potential from both its shale and deepwater assets, making RDS-A a strong candidate for future gains.

Over the past three decades, the UK-based National Grid (NGG ) has grown into one of the largest utilities in the world. A dividend yield of 5.81% and an annualized payout of $.374 make NGG a strong dividend play when compared to the broader utilities average.

The company continues to perform well amid new rate schemes in the United States and continued incentive revenue in its home market. Both factors are resulting in returns on equity that are significantly higher than U.S.-based regulated utilities.

GlaxoSmithKline (GSK ) is a global pharmaceutical and healthcare group based in the UK. The company was founded in 1999 and has quickly emerged as a leader in the creation, development and manufacturing of drug products.

GSK yields 4.44% and pays $1.93 annually. Despite suffering from patent woes, the company continues to enjoy new product growth. Combined with its broad restructuring plan and impressive pipeline of products, GSK appears to have solid growth prospects.

U.S. investors looking to expand their horizons with foreign stocks have a lot to gain by exploring these five dividend plays. When it comes to long-term investing, diversification is the name of the game. Given that only 10% of the average U.S. investor’s portfolio is comprised of foreign stocks, looking abroad may offer a sound value proposition.

Check out our Best Dividend Stocks page by going Premium for free.