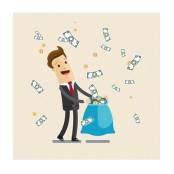 7 Dividend Aristocrats With Yields Over 3%

Dividend Aristocrats are companies that have increased their dividends for 25 consecutive years. Below, Dividend.com analyzes 7 such stocks that are currently yielding over 3%. We also analyze their relative strength in terms of stock price performance, payout ratios for dividend reliability, valuation and expected 2017 earnings growth estimates.

This natural gas distribution company is currently yielding 3.34% and has consecutively increased its dividends for more than 60 years. The stock is up 10.61% in 2016 so far. With a 2016 EPS estimate of $2.16, the stock currently has a payout ratio of 86% and it’s estimated that the company is likely to give a 2017 EPS of $2.27, resulting in a 5% growth estimate. The stock is currently trading at its 52-week high and is trading at a valuation of 23 times 2016 earnings.

This tobacco company is currently yielding 3.79% and has consecutively increased its dividend for 44 years. The stock is flat this year as it’s down only -0.2%. UVV is a small cap company ($1.2 billion) and hence we don’t have a lot of analysts tracking it, which has resulted in non-availability of earnings estimates for 2016 or 2017 resulting in no growth or PE estimates.

AbbVie is a major drug manufacturer that is currently yielding 3.65%. The company has raised its dividend for 43 consecutive years. The stock is up 5.5% for 2016. Earnings estimates for 2016 are at $5.01, while 2017 estimates stand at $5.99 resulting in a growth estimate of 19%. The stock is trading at just 12 PE and has a very healthy payout ratio of 45%, which leaves room for the company to grow its dividend in years to come.

This select list of companies are yielding higher than the Dow 30 and have outperformed in their respective industries. Single digit growth estimates should be viewed positively for dividend stocks, along with payouts in the mid 50’s, that leave room for the company to grow its dividend next year.

You can find a complete list of all stocks that have raised their dividends for more than 25 consecutive years here.