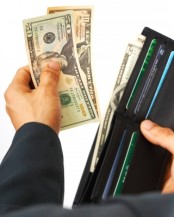 A Fresh Look at the 4% Rule

In 1994, William Bengen, a financial planner in San Diego, made a major contribution to the way we think about retirement. Using historical data for stock market returns over 75 years, he looked at how much money a retiree could safely withdraw from his or her portfolio each year over a 30-year retirement.

Bengen determined that someone could draw down 4% annually from their portfolio without fear of outliving their money. In the two decades since Bengen’s findings were published in the Journal of Financial Planning, the “4% Rule” has become enshrined in financial planning literature and continues to serve as the principal rule of thumb for calculating how much income a portfolio can safely generate.

In light of the recent market drop and today’s low interest rates though, does the rule still work?

First, it should be noted that the rule has been tweaked over the years. Bengen himself modified it 2006, saying that the maximum safe historical rate is 4.5%, if the portfolio is tax-free and, 4.1% if it’s taxable.

Other financial planning thinkers have weighed in, too. Before the crash in 2008, many financial planners believed that 5% or even 6% withdrawal rates were safe. Since then, advisors have been more wary, particularly in recent years as interest rates have fallen to near zero and the stock market has remained richly priced and recently much more volatile.

Michael Finke, who heads the personal financial planning program at Texas Tech University, believes that stock and bond market returns in the 21st century are unlikely to be carbon copies of 20th century returns, which were the foundation of Bengen’s calculations. Those calculations were based on average real bond returns of 2.6% and average real stock returns of 8.6% — levels that seem lofty by today’s numbers.

As a result, withdrawing money at the traditionally “safe” 4% rate in today’s low-return world translates into about a 50% chance of running out of money, Finke says.

But hold on, another major financial planning expert disagrees. Michael Kitces says that even if market returns are worse in the future than the worst returns that the 4% rule was based on, the portfolios today’s retirees are starting out with may still be enough to survive for 30 years without running out of money — with just less left over.

“If the Great Depression and the stagflationary 1970s couldn’t break it, and the crash of 1987 and even the global financial crisis of 2008 were just speed bumps, it will take a lot to set a new safe withdrawal rate below 4%,” Kitces said.

So is 4% still the right withdrawal rate or is it something less?

Since there’s no way of telling beforehand, the best approach depends on your own comfort with risk. I tend to err on the side of caution and look at it this way: If I take out too little and there’s more left over, my kids will get it, and that’s fine with me. Others look at the number and say, hey, I worked for this all my life, I want to enjoy my money while I’m alive.

There’s no “right” answer. Follow your heart, but be sensible.