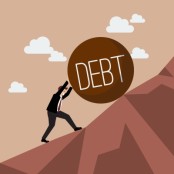 If you think that after the current stock market volatility calms down things will get back to normal, think again. The worldwide level of indebtedness — both apparent and obscured — is so enormous and so distorting that stock markets, economies and the global banking system have entered a new reality that will affect us in ways we have yet to figure out.

I know that sounds nutty, but we have become so inured to the weirdness all around us — and are so prone to the all-too-human tendency to believe that things will eventually return to some kind of familiar normalcy — that we aren’t recognizing how weird the new “normal” really is and why it is likely to persist.

Core interest rates have never been lower, yet as a spur to the economy cheap money seems to be ineffective. Of course, what banks charge on credit card interest is more than 100 times higher than what they pay to savers, but that’s another story. Cheap money is supposed to induce businesses to borrow and expand because if the cost of capital is only a tiny fraction of the profit it earns, borrowing makes sense. But that’s not happening to any significant degree, and that’s weird. Rather than invest and grow, big companies would rather borrow money cheaply and buy back stock, which gives the illusion of health but actually means the businesses are shrinking — and debt laden.

The Federal Reserve also created lots of credit over the past several years when it bought up mortgage-backed securities and other debt instruments. It paid for that debt by essentially printing money. That’s supposed to be wildly inflationary. But, much to the delight of economist and New York Times columnist Paul Krugman, whose calls on inflation have been right (or should I say “correct,” since he is clearly on the left), all that debt creation didn’t move the inflation need one whit. So we have massive monetary creation and very little to show for it. That’s weird too.

When we talk about what is owed, which is the definition of a debt or a liability, we can’t forget the promises made by employers to employees. Fortunately, what remains of corporate pension plans are in OK shape in terms of funding as companies have shifted to defined contribution plans. But our retirement funding problems aren’t solved with that: the average 401(k) account is worth only about $100,000 — hardly enough to sustain someone for a decade or two after they stop working.

State and local pension funds are unfunded to the tune of $1 trillion, which means that as municipal workers continue retiring and drawing on their pensions, governments will have to come up with $1 trillion from taxes or some other source (selling state land?) or renege on paying pensions. But very few people talk about that.

Of course the big daddy in underfunding is Social Security, which is $220 trillion in the hole, according to Boston University professor Laurence Kotlikoff. That could be fixed by raising the retirement age, increasing the Social Security tax, means-testing benefits, or any combination of those and other tweaks.

And that’s just in the U.S. China’s current woes are due largely to its huge debt, and Japan and Western Europe are also swimming in red ink. But few want to address the issue.

Doomsayers like to predict the whole house of debt cards will collapse, leading to global depression. That would be too logical. It’s more likely that we’ll eke by, but the weight of debt will change all our market, economic and interest rate expectations. In the meantime, take all “expert” pronouncements with a grain of salt — and keep looking for dividend stocks that pay you while you make sense of what’s going on.