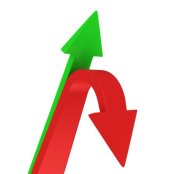 If the Bear Is at the Door

Tuesday wasn’t supposed to turn out the way it did. The market started out with a full head of steam, gaining more than 400 points on the Dow, or about 2%, in morning trading. After keeping most of those gains for most of the day, the market sank in the last hour, closing down 204.91 points, or 1.3%, at 15,666.44.

A trading day like today is almost more painful than the previous three. Tuesday’s morning recovery was a sign that the worst was behind us, at least for now. If the day had ended higher, there would have been a sense that things are basically OK and we had returned to some measure of normalcy. Sure, markets would go down again, but they’d also go up.

Instead, there’s now the queasy feeling that the worst isn’t over and more declines are on the way. A few more days of losses, with maybe another lalapalooza tumble in the mix, and we will witness the start of bear market psychology. When the bear arrives, people expect the worst because the worst is usually what happens. It was like that in the 1970s, when the market essentially went nowhere for years, and the investing public came to think of equities as an investment for losers.

Currently, people don’t hate stocks, they just want them to come back. We’ll see if that happens.

In meantime, be consoled that we’ve been through much worse. As far as market dives go, the four-day 9.7% decline in the Dow Industrials since last Thursday won’t make much of a mark in the record books.

Yes, the four-day slide translates into a 14.5% decline from the Dow’s high of 18,312.29 in May. That’s clearly a correction — one that’s been sitting on ice since a pause in the fall of 2011. But let history put the rout into perspective.

In percentage terms, the biggest loss on the Dow Industrials occurred on October 19, 1987, when the average dropped by 22.61%. We all know what happened in the wake of that spectacular crash and the little-remembered eighth place decline of 8.04% on October 26, 1987: not much. The economy chugged along unscathed and the market made up all it had lost in a little over a year.

As measured by the Dow, Monday’s loss of 588.40 points registered eighth on the all-time worst declines list in terms of point loss. But in percentage terms, the 3.5% loss didn’t even make the top 20 — and losses on Thursday and Friday were even lower, at 2.1% and 3.1%, respectively.

Don’t get me wrong; I’m not saying the recent market losses don’t hurt. And I’m not one of those market cheerleaders who says you’re crazy if you get frightened and think it might be better to cash in your chips and sit out the storm. You’re not crazy, just don’t do it (the market’s crazy, and the day after you sell there’ll be one of those 300-point booms and you’ll kick yourself).

Even if a rough patch lies ahead of us — and it probably does — the best bet, even if it’s not the perfect bet, is to continue to hold high-quality stocks that pay solid dividends, as well as other quality assets. There’s really no 100% safe port on the investment sea where you can pull in to ride out the storm. We all have to bob along as best we can.