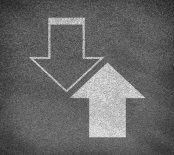 It was mid-February 2009, and I’d turned away from the three monitors on my desk to focus on a single piece of paper in solitude. I had turned off the TV in my office as the incessant chatter about the ‘end of the world’ or, within seconds, a rebuttal about a ‘generational buying opportunity’ between the talking heads on CNBC was increasingly nauseating me. (side note: this was prior to taking a hard ‘no CNBC’ stance, given I don’t believe it is a tool that is helpful to a long-term oriented investor).

The market was a blood bath: the tape had no concept of ‘green’, only ‘red’, and often a deep hue. Day after day after day, the market was down. And at this point in time it was not only day after day, but also week after week, and month after month. The selling came in waves, but the trend was very clear. At times, it felt like we were going to zero and that we’d soon revert back to a barter economy, powering cars with our feet a lá Fred Flintstone.

In that moment, while sitting at my desk staring through that piece of paper, I flashed back to recall the way I felt sitting in my condo in Boston while watching the house vote on the initial iteration of the bill to pass the TARP program, which would allow the U.S. Treasury to (re)capitalize the U.S. financial system with up to $700 billion.

The first vote failed, and as the inability to pass the bill became more and more evident with real-time voting, the market sank further and further. That day, back in late September 2008, I knew this was going to be a very different world, one where policy makers and central bankers played a key role in the world economy, and moreover, in the directional trend of asset classes. I recalled watching 433 members of the house single-handedly move the Dow by nearly 1,000 points (the initial bill was voted down 205-228 on September 29). It was clearly going to be a bumpy road, fraught with both opportunity and heartache for investors and individuals alike. This would reverberate throughout the ‘real’ economy in a meaningful way, (I certainly don’t purport to have forecast the degree to which policy makers and central bankers would be involved in the economy – especially not for the duration of time they have now been).

The Drop of Doom

Between that day in Boston in September 2008 and sitting at my desk in February 2009 it was not so much a roller coaster of a market, but a ‘drop of doom’. The chart below illustrates this better than I can explain.

As I stared at that piece of paper, while sitting at my desk, I attempted to remove myself from the influences of the outside world and simply wrote down three words:

Beside each, I drew a square box.  I sat, and I pondered, and I stared some more.

Remember, at this time the Fed had already announced that the monetary policy would be unprecedentedly loose for as long as required. ‘Helicopter Ben’ basically said, fuel up the bird, because if I have to, I will drop money from it to stave off deflation and reinvigorate the credit markets.

While the moniker ‘Helicpoter Ben’ is sexier than the impetus to the nickname, it was poignant. The nickname came from a speech on November 21, 2002 to the National Economists Club in Washington, D.C., titled, “Before the Deflation: Making Sure “It” Doesn’t Happen Here”. Bernanke gave the speech before he was Chairman of the Fed, as he was during the financial crisis, but rather a Governor. The key line from the speech was this:

Even if households decided not to increase consumption but instead re-balanced their portfolios by using their extra cash to acquire real and financial assets, the resulting increase in asset values would lower the cost of capital and improve the balance sheet positions of potential borrowers. A money-financed tax cut is essentially equivalent to Milton Friedman’s famous ‘helicopter drop’ of money.

While the speech resulted in a nickname for former Fed Chairman Bernanke, it also resulted in me choosing which arrow to draw in the box beside each of the asset classes on my nearly blank sheet of paper.

Given the mandate of the Fed to stave off inflation using all tools in its arsenal, including quantitative easing, which was a newly minted buzz word of the day, it was really hard to see how stocks, bond prices and real estate wouldn’t go up, given the tidal wave of money needed to find a place to go.

By no means am I musing to suggest that over the course of the last seven years I’ve been ‘right’ in all aspects of my portfolio – I most certainly haven’t been. For example, I was dead wrong on the price of natural gas for a long, long time. It was painful, but I digress.

But rather, I muse because after penning a piece a few weeks ago about the nearly unbelievable Chinese stock market’s governmental influence, and considering the ECB’s relatively new QE program, it makes me consider and re-ask myself: where does all the money go?

Everyone is and was continuing to ‘chase yield’; everyone, from large pension funds to mom and pop investors to the slew of baby boomers retiring. Capitalization rates on real estate are at historical lows, the yield on the 10-year remains paltry, the pages of TechCrunch report on the most recent Unicorn (start-up company with a valuation of more than $1 billion) almost daily.

By way of mental exercise, what arrow would you put in your box beside (U.S.) ‘Stocks’, ‘Bond Prices’ and ‘Real Estate’ over a time period of the next year?

While we’ll continue to live in a world of fundamentals and price vs. value and looking to be owners of excellent long-term dividend payers, we can’t help but consider, as we embark on our seventh year of major interventions by governments and bankers within our global capital markets, how that might continue to obviate rationality.

Have a great rest of your weekend, and please be sure to write in with your own “musings”. Talk to you on Monday.