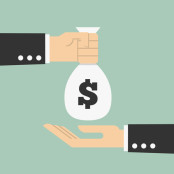 As a dividend-oriented investor, you are probably more likely than most to understand that for Americans fortunate enough to have accumulated a nest egg, their level of financial assets will be an important determinant of whether they can maintain their current lifestyle in retirement.

Many investors, however, and a surprisingly large number of financial advisors, don’t fully understand that important point. Nor do they seem to understand that for even fairly affluent Americans, Social Security and income generated from financial assets will determine their lifestyle once they’ve stop working full-time.

Let me share some figures on financial nest eggs and Social Security to put this in perspective.

For Americans between the ages of 45 and 54, average net worth minus the equity in one’s home (which is great to have, but can’t be counted as a financial asset) is about $25,000, according to the Census Bureau. For those between the ages of 54 and 65, it’s about $46,000; and it declines after that as retirees draw on their nest eggs for living expenses.

That’s not a lot of money. Still, even excluding the almost 40,000 Americans who Credit Suisse estimates are worth more than $50 million, there are many Americans with nest eggs in the high six figures or the low seven figures (the millionaire-next-door types), who have been able to invest and save regularly during their working years. This modestly wealthy group, and the higher strata of wealth, of course, are the prime target market for financial advisors, who theoretically help their clients prepare for retirement.

But many financial advisors, focusing almost exclusively on the accumulation phase of investing, know little about the “decumulation” phase-when you withdraw money for living expenses-and are often ignorant of how much Social Security benefits mean to even modestly wealthy individuals and how much health care and other costs shape retirement income needs.

According to the government, Social Security represented on average 35% of the aggregate total income of couples and non-married persons aged 65 or older in 2012. Earnings from employment represented 34%, income from financial assets represented 11%, and pensions represented 9%.

A study by mutual fund giant Vanguard in 2014 found that 28% of retirement income for investors with nest eggs well above the national average (the respondents had median financial assets of $395,000, excluding the value of their home) came from Social Security. About 20% of income for that group came from traditional pensions and just 11% from investments; these are percentages that are likely to reverse themselves as defined contribution plans such as 401ks, 403bs and IRA programs continue to replace defined-benefit pensions.

Okay, so why make a fuss about income from financial assets, or the spending down of those assets, being important in retirement? While seemingly obvious, a surprisingly large number of people either can’t or won’t make the connection between X dollars of assets being able to generate Y dollars of income.

Countless financial advisors have told me of clients reaching retirement age who expect that their $100,000 nest egg will provide them with income of $20,000 or $30,000 a year for the rest of their lives. Others expect their financial advisors to generate steady returns of 8% or 10% a year. Some believe that by finding the right fund or right advisor they’ll strike gold. Still others assume that if they simply buy riskier investments, their returns will be higher, ignoring, or remaining unaware, that the value of their investment may decline.

Fortunately, because yield and returns are central to the way they approach investing, dividend investors are more realistic than many other investors and have a leg up when planning for retirement income. In future columns, we’ll examine ways to create dividend-oriented portfolios that can help fund a comfortable retirement. For more information on what you’ll need to retire, click here.

Evan Cooper, a Contributing Editor at Dividend.com, is an award-winning financial journalist. After reporting on business at The Miami Herald, Evan worked on Wall Street at the New York Stock Exchange, the Securities Industry Association and Drexel Burnham Lambert. He was Editor-in-Chief of On Wall Street, a publication for financial advisors, research editor of Institutional Investor, and Deputy Editor of InvestmentNews, where he was honored by the Society of American Business Editors and Writers with a “Best in Business” award for his online opinion column.