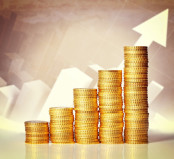 Dividend-paying sectors like utilities, telecom, and consumer staples are widely considered recession proof. These companies have business performance and sales which are not highly correlated with the larger economic cycle, or in other words, these companies are seen as good investments when the economy goes south.

Any investor should consider investing in these industries; if anything, these industries can guard against potential global concerns and volatility in the marketplace. No matter how the economy is doing, the revenues, the earnings, and the cash flows of firms in these industries remain relatively stable and so should their share price.

This article will delve into some of these industries including healthcare, food and beverage, discount retailers, utilities, and non-durable goods and how they performed during the lows of the last recession. Please note that all stock prices are on a split-adjusted basis.

The pharmaceutical industry stood out for its strong growth during the great recession and has proved resilient during previous recessions; it’s one of the few industries that is defensive in nature, capable of achieving positive sales growth even during a downturn. Several factors assure continued strong demand for medical products. The population is aging, and most pharmaceutical products cannot be considered discretionary products.

Johnson and Johnson has over 126,000 employees creating products in three categories: consumer, pharmaceutical, and medical devices. The consumer segment includes brands such as Tylenol and Listerine, while their pharmaceutical segment provides products including immunology, infectious diseases, and neuroscience, and other diseases. Their medical device segment offers general surgery products, blood glucose monitoring and more. In 2014, Johnson and Johnson pulled in a whopping $74 billion in revenue.

Coca-Cola is one of the largest companies on the planet with over 3,500 products worldwide, 128 years of history, and products available in over 200 countries worldwide. Not to mention that it is one of Warren Buffett’s largest holdings, with himself personally drinking 5 cokes per day.

When the economy is flailing, consumers try to score a bargain, and what better bargains than shopping at discount retailers. People have to save their pennies and thus discount retailers thrive under these conditions. Discount retailers can be the large department stores or small dollar stores, at the end of the day they offer bargain basement prices.

Walmart is the world’s discount retailer behemoth with over 11,000 stores worldwide under 71 different banners in 27 countries generating over nearly $400 billion in 2014; the world’s largest company by revenue. Walmart alone employs over 2 million people and offers practically every product category imaginable in the consumer goods segment.

Water, gas and utilities companies are all deemed to be recession proof industries. Utility companies are thought of benefiting from slower economic environments as interest rates tend to be low during this time and they can borrow at lower rates. Even in economic hardship, people need to keep their families warm and light their homes. Utilities can be considered essential and as such have more consistent sales than firms operating in cyclical industries.

Pacific Gas and Electric Company is a provider of natural gas and electricity in northern and southern California and one of the United State’s largest utility companies. In 2014, it generated over $17 billion in revenues and pays a hefty dividend to boot.

Proctor and Gamble sells everything from Beauty; Grooming; Health Care; Fabric Care and Home Care; and Baby, Feminine and Family Care. Some of its biggest brands include Head and Shoulders, Olay, Pantene, Gillette, Crest, Downy, Duracell, and 73 others. In 2014 Proctor and Gamble pulled in $83 billion in profit with products in over 180 different countries.

See also The Companies that Own the World’s Most Popular Brands.

Investors cannot predict the cycle of the economy, but they can cater their investment choices to be more immune to the ups and downs. Healthcare stocks, food and beverage, discount retailers, utilities, and non-durable goods are some of the recession proof industries investors should take into consideration when building out their portfolios.