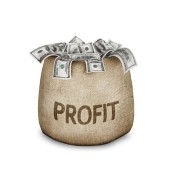 Many companies that generate excess profits or cash flow decide to return a portion of their earnings to investors. Their capital returns typically take two forms: dividends and share repurchases. Which of the two a given company will utilize, and to what extent, are often determined by what their shareholders want.

Alternatively, a company can choose share repurchases. When a company buys back its own stock, it reduces the number of shares outstanding. This helps boost earnings growth since each remaining share captures a greater percentage of a company’s earnings. Higher earnings typically lead to higher share prices over time.

Lastly, companies can pair dividends with share repurchases, in which they utilize a mix of each.

Typically, dividend payments are more customary from firms with large, strongly profitable operations. Large-cap companies tend to be more reliable dividend payers than small-caps because their businesses have established brands and consistent cash flow. Some of the highest dividend-paying sectors of the market are tobacco and telecommunications stocks. The reason for this is that they generate high levels of free cash flow, as they enjoy relatively low capital expenditures in comparison to their free cash flow.

But not all companies like to issue dividends. When a company becomes a dividend payer, it is beholden to that dividend. Investors come to expect the dividend will remain intact and actually increase in the years ahead. Management teams in cyclical industries are sometimes reluctant to have to pay higher dividends each year because there are times in which business conditions ebb and flow along with the broader economy. A company can easily curtail share repurchases to save cash when times are tough. On the other hand, it is very difficult to reduce dividends, as that decision can turn into an investor-relations nightmare.

However, when done well, dividends can attract a very loyal shareholder base. Shareholders of companies with the longest track records of dividend payments tend to stick with the company through thick-and-thin, even when the economy enters a recession, as long as the dividend remains intact. Maintaining dividend payments can help keep a stock less volatile than non-dividend paying stocks, as investors are less likely to sell if there is a meaningful dividend coming each quarter.

For example, Altria (MO ), which sells the Marlboro cigarette brand and a host of other staples products in the United States, has raised its dividend 49 times in the past 46 years. It maintains a stated policy, in which it seeks to distribute 80% of its adjusted earnings per share each year. By comparison, Altria spends relatively little on share buybacks. The biggest reason for this is the makeup of Altria’s shareholder base. Altria is a favorite stock holding among individual investors at the retail level, but less so on an institutional level.

By contrast, technology companies are among the biggest share buyback firms. One of the most prominent technology companies that does not pay a dividend to shareholders is Alphabet (GOOG), parent company of Google. Alphabet is one of the biggest companies in the technology sector, and yet, it does not pay a dividend. This is despite the fact that many of its peers in the same sector have begun to pay dividends to shareholders, including Apple (AAPL ), Microsoft (MSFT ), and Cisco Systems (CSCO ).

Alphabet prefers to utilize excess cash flow above and beyond its investments in future growth initiatives to buy back stock. In 2016, Alphabet’s Board of Directors authorized the company to repurchase 514,000 of its own shares, with a total remaining authorization for future purchases of approximately $3.7 billion. In the technology industry, a great deal of employee compensation is comprised of stock-based awards. Buybacks are a way to manage dilution. In Alphabet’s case, the company spent $2.3 billion in net payments related to stock-based awards.

Apple, Microsoft, and Cisco Systems are three examples of companies that pair dividends with share repurchases. In other words, they utilize a blended capital allocation program which includes both buybacks and dividends to give investors the benefits of both policies. This is why these three stocks are often favored among both growth and income investors.

The dividends versus share buybacks debate rages on. Investors differ on which type of capital allocation is best, based on their own preferences. Growth investors interested more in capital appreciation tend to favor buybacks, while investors who desire income—such as retirees—clearly favor dividends. There is no right or wrong answer to this question; there have been many instances in which both dividend and buyback companies have done very well for their investors over time.