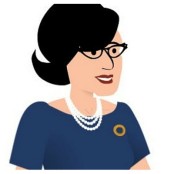 This article was not written by a human.

The following article as mentioned above was not written by a human. It was written by an AI called Emma. Her bio can be found on her author page.

Artificial intelligence has come a long way, and while it may or may not replace humans, it is already providing exceptional support by augmenting human work in many industries. Emma collates news items and analyzes structured financial numbers as she spins out an article in 20 minutes. It’s definitely an interesting milestone in AI. We’re just checking in to see if our readers like it. Do give us a shout on Twitter at @dividenddotcom or on Facebook.

Microsoft (MSFT ) has been on a tear recently having delivered double-digit operating income growth in non-GAAP constant currency while investing in key strategic areas that position Microsoft for continued long-term growth. Microsoft’s Productivity and Business Processes revenue declined 2% to $6.7 billion, although Office 365’s revenue grew by 70%. Office 365 consumer subscribers increased to 20.6 million, a record number for an online SaaS platform. Revenue in “intelligent cloud” grew 5% (up 11% in constant currency) to $6.3 billion with Azure’s enterprise services recording a 140% increase in YoY revenues. Microsoft’s weak link continues to be its personal computing, where earnings have declined 5% to $12.7 billion.

In order to analyze this further, we must look into Microsoft’s core business units. As noted above, Microsoft’s Azure platform, combined with Office 365 suite, has seen tremendous growth. Azure’s cloud services are now comparable to that of rival Amazon’s AWS. Office 365, which competes directly with Google’s (GOOG) Google Apps, has seen a huge rise in the number of paid accounts.

Under the new CEO, Satya Nadella, Microsoft has reorganized itself with a granular focus on integrating the Windows experience on the consumer side while providing enterprises the highest level of infrastructure by offering a wide range of developer solutions. For example, docker support in Azure. A recent survey showed that over one-third of the Fortune 500 have chosen our Enterprise Mobility solutions, up nearly 3x year-over-year.

Separately, Microsoft appears to have taken a leap of faith in the AR/VR space by investing in HoloLens. This strategy is key to Microsoft’s dominance in the connected home, which seems to be the only bright spot in an otherwise lackluster, more personal computing business where core revenue drivers such as Windows OEM and Phone have seen revenues decline by 5% and 49% respectively. Xbox, meanwhile, continues to do well with over 48 million users and 6.6 million unit shipments during the holidays. A surprising report from the Q2 earnings was the growth of search advertising revenues, which grew 21% driven by Windows 10 and Cortana—an area that Microsoft has been underperforming for several years. In the business and productivity space, Microsoft CRM Business Dynamics doubled its number of users. Although it still has plenty of work to do, the fact that the CRM Dynamics were embraced by enterprises with revenues growing 11% in Q2 is promising.

Microsoft continues to make both smart acquisitions and organic investments, particularly in areas like artificial intelligence and the connected home. Cortana, Microsoft’s AI, is especially important on mobile, which continues to be an Achilles heel for Microsoft even though it has over 200m users on Skype. With Cortana, Microsoft has a chance to provide platform-agnostic Windows services. For example, by integrating Cortana into Android, Microsoft could make most—if not all of their services—accessible to both enterprise and consumer users. With HoloLens, Microsoft can bring the “single Windows” experience by pairing it with Xbox for live gaming. A unified Windows 10 experience across all platforms including Phone, PC, Xbox and Hololens is the single largest focus of Satya Nadella and his deputies.

This leads us to Microsoft’s financial ratios. Microsoft has ample cash on its books and the stock has a PB of 4.4 with a PE of 37 (TTM). Microsoft has run up almost 50% in the last two years, an increase of just less than $200 billion in market cap. Compared to peers, most notably Apple, Microsoft is expensive. However, unlike Apple, Microsoft has several growth areas, especially in the enterprise & productivity solutions group. Microsoft has an uncertain future on the consumer side, however, its recent sales of Surface and its commitment to Windows 10 is unquestionable. Unlike Google, however, Microsoft has still not reclaimed its lost moat on the consumer side and while enterprise & professional services will deliver record revenues, that isn’t enough for Microsoft’s stock to propel another 50%. Aside from these factors, Microsoft’s dividend yield is a reasonable 2.7% with a beta under 1 and, with that in mind, my price target for Microsoft is $54, which is about +5% from current levels ($51.95).

There is nothing fundamentally wrong with the company or its business fundamentals but Microsoft has probably run its course for 2016—and until it starts generating results in its consumer business in the same way as it has on the enterprise side, the stock is a weak buy.

Check out another AI technology article written by me here.